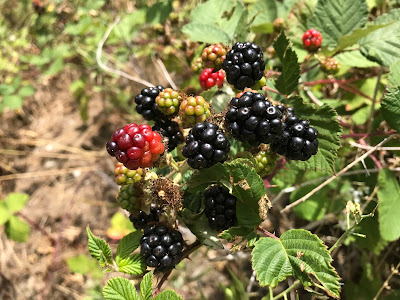 It has been over four months since I started sheltering in place. To date, over 151,000 people have died from COVID-19 in the United States. Worldwide there are over 16.5 million confirmed cases and more than 654,000 individuals have perished. Now, at the end of July, the blackberry bramble has become my role model.

There is a small yard behind my apartment building, but none of us tenants are legally allowed to use it. Most of the time no one goes down there at all. Left to the wiles and tenacity of nature, this little patch of sandy earth has been claimed by the blackberry bushes. And by claimed, I mean completely overgrown. Pokey, plucky, and persevering, in midsummer they are laden with delicious, dark fruit that is just waiting to be picked by anyone willing to flaunt the fine details of their lease agreement and endure a few scratches and minor impalements. 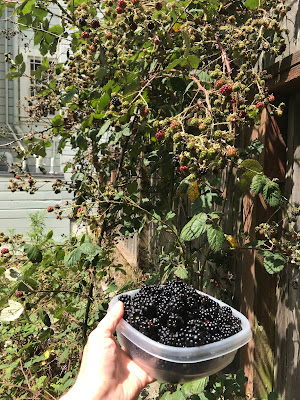 Berries are, no question, my favorite food. I love berries so much that I suspect, if reincarnation is really a thing, I may have been a bear in some previous life. Unable to resist free berries, and with dreams of tarts and scones dancing in my head, each day for the last few weeks I have been sneaking down to the backyard for 30 minutes or so of prime urban foraging. With maroon-stained hands I fill quart containers with ripe berries and, if the fog clears, absorb a little Vitamin D. When I can't get out for a proper walk or bike ride, these micro-outings are flotation devices in the vast sea of pandemic life.

Every few years the landlord hires a couple of workers to slash down and dig up the bramble, reducing the yard to seemingly-barren sand. Once, they forgot about the yard for many years in a row and a small miracle happened. A two-story-tall acacia tree grew back there. Who knows how it ended up taking root in this neglected plot? Perhaps it migrated across the street from Golden Gate Park via a windblown or randomly-dropped-by-a-bird seed. Maybe it flew in from further afield. Regardless, from virtually nothing this exquisite tree sprouted, and grew and grew until its branches embraced all the open space in the yard. Inches away from my studio window, its filigreed leaves waved to me each day.

Then one morning I got up early and went to aikido class, as was my habit at the time. Returning home a little after 8 AM, I heard a shrieking, screaming chainsaw and ran to my window. Workers had already cut down half the acacia tree. Minutes later it had been reduced to a pile of brush. Devastated, I sat on the floor and wept. I already missed my tree friend, and I couldn't stop seeing its fate as symbolic of the broken, exploitative relationship most of humankind has with the natural world. Later, I went down to the yard and picked up part of an old seedpod the tree had left behind. Although it longer contained any physical seeds, it was something to remember the tree by, to remember to do better.

I still have it. 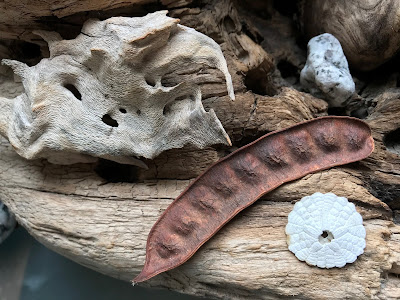 In the years since, the acacia has not (yet) grown back, but the blackberries endure. They are unstoppable, a force to be reckoned with. 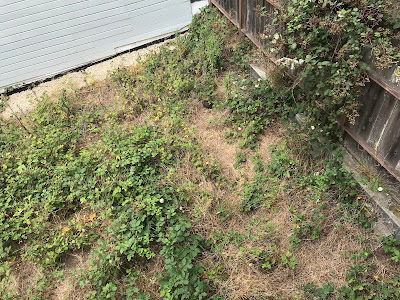 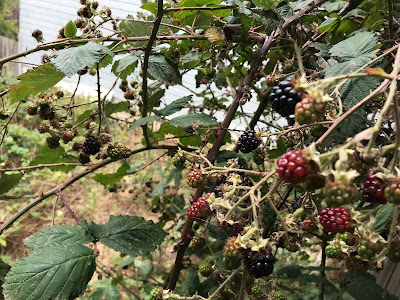 Like the graffiti I happen upon while biking lesser-travelled tracts of the Presidio (which gets whited-out periodically but always returns, re-imagined, bearing new colors, patterns, and messages), the blackberries simply refuse to give up, to stay wiped out. 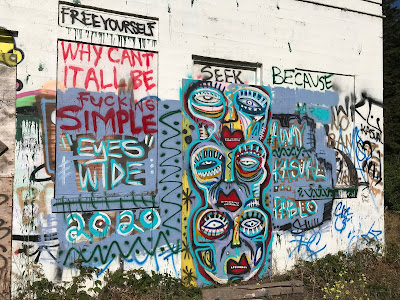 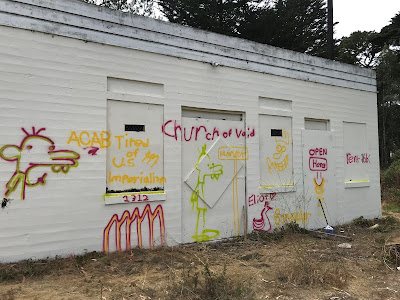 After living in this flat for 25+ years I’ve seen the bramble battle its way back from “eradication” every time. A year or two after each backyard cleanup, the free berries run rampant again, and tart, maroon goodies are back on the menu.

So on dark days, when it feels like greed, corruption, and hatred are in the process of wiping out all that I hold dear, the blackberries give me hope. No matter what crazy, dystopian nightmares COVID-19 and messed-up human politics throw at me (lack of a coordinated national pandemic plan, idiots refusing to wear masks, unidentified federal agents teargassing moms and vets - there are so many scary examples to choose from!), my new mantra is to "be the blackberries." Some days this means just hanging in there, surviving and bearing witness to these crazy times. On better days I believe I might have something to contribute, that it's possible to help improve things for humanity and Earth as a whole.

But on the best days the world still feels ripe with possibilities, like another acacia tree might grow in the backyard and, someday, I will sit underneath it naked-faced and side-by-side with friends and family, laughing and eating blackberry cobbler. 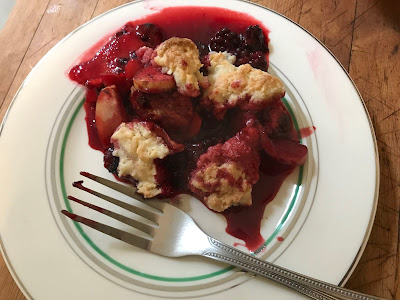