My studio window looks out across my neighbors' backyards. There is a plum tree, a redwood tree, a lemon tree, and several scrubby trees I don't know the names of. Further afield, an arc of forest rises from the Presidio. If I stand on a chair, so I can peak above the plum branches, a small corner of the Pacific Ocean and the Point Bonita Lighthouse in Marin Headlands become visible. On very clear days, still standing on my chair, I can see all the way out to Point Reyes. The lease on my apartment does not include use of my building's backyard (it's just overgrown with weeds - what a waste!), so this view is all I have for private green space. On days when I don't leave the house, my window is a sanctuary, a life jacket. 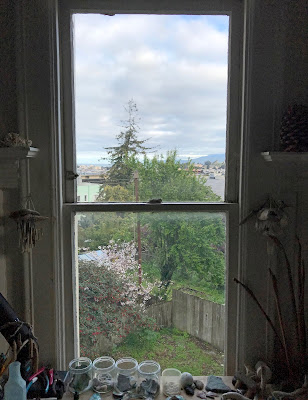 Over the past few weeks simply going out for a walk has become increasingly stressful. I've largely given up on Golden Gate Park unless it's a weekday at a very weird, unpopular time. Too many people! What strange practices I find myself cultivating: trying to augur when other people will not be in a place, calculating speed and trajectories to maximize "- humans". Though most folks seem to be making a sincere effort to social-distance responsibly, there's always some oblivious jogger or cyclist who comes out of nowhere and nearly runs you over, or small children or off-leash dogs whose movements can't be anticipated. In the face of uncertainty and real (but sneaky) danger, I just want some control. I want the choices that are left to me to be predictable so I can manage my risks. I don't like viewing the world this way, and it's exhausting to stay on high-alert every time I leave my house, but that's where I'm at.

And that's why when I wandered up to the Presidio Golf Course the other day I suddenly felt so light. Here was an open expanse of GREEN, GREEN, GREEN with almost no one in it! At first I thought I must be mistaken, that there was no way we were allowed to wander freely here. Then I noticed a few people inside, and found a sign saying the course was closed to golfing, but available for other appropriately-spaced, non-destructive uses. Open Space Jackpot! 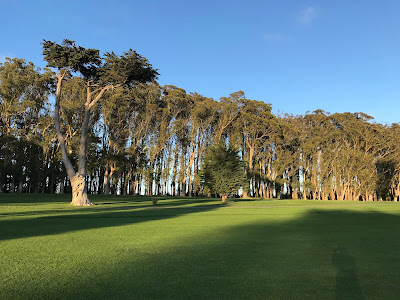 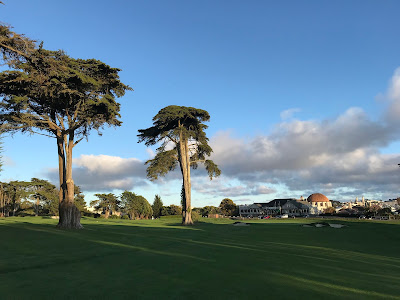 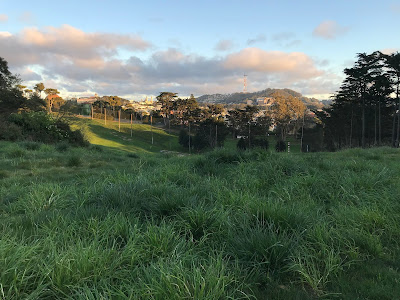 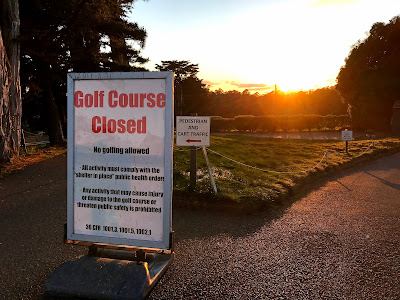 This was, in fact, my very first time walking through the Presidio Golf Course, even though I've lived in San Francisco since 1992. I have never understood golf as a sport (it just doesn't seem that athletic!), and so often golf courses waste water and land that I would rather see used in other ways (or not "used" at all). Furthermore, most golfers are not my kind of people. I like my land, and my friends, less manicured and more unruly. In the past I never had any reason to go to the golf course. Indeed, it was a place I actively avoided. 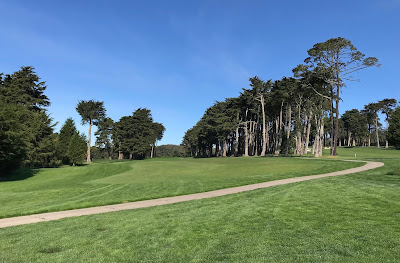 Now, however, starved as I was for green space, I suddenly experienced the golf course as something else entirely: liberty. As long as I stayed off the paved paths it was easy to remain far, far away from other humans. I often had an entire fairway to myself, and no one but me seemed inclined to wander through the long, course grass of the roughs, which I liked precisely for their roughness, their (relative) wildness. It's funny how so often we limit ourselves to established paths, even when we don't have to.

Friday morning I finished reading Richard Powers' Pulitzer Prize-winning novel, The Overstory - an incredible book about trees, relationships between humans and the natural world, and so much more. After spending a lot of intense time with trees in the book, I felt like I should go visit some in person.  So I went back to the Presidio to listen to/watch them dance in the day's strong winds.

I ended up in the middle of a stand of eucalypts, fully aware that this was not the smartest place to hang out on a windy day (eucalyptus trees tend to drop branches frequently, and I've heard them referred to as widow-makers). Leaves wooshed, swirling above my head, and the swaying tree trunks creaked and moaned. Morbidly, I considered that I would rather be killed by a falling tree branch than suffocated by COVID-19-induced pneumonia. But really, I'm not ready to die at all. There's too much that I still want to do, and I'm curious to see what comes next.

One of my favorite passages in The Overstory is an instruction/revelation:

"Never capitulate, but divide, multiply, transform, conjoin, do, and endure as you have all the long day of life.

I am hopeful that out of all this pandemic-fomented chaos and loss will come growth, that humans will choose to redefine our values and reorganize our systems, that we can become something better.
Posted by Cheryl E Leonard at 9:17 PM