Tomorrow will mark the end of my 8th week of sheltering-in-place, lockdown, safer-at-home, social distancing - whatever you prefer to call it. We've gone from "masks are bad for the general public" to mandatory masks here in San Francisco. Testing has increased locally and anyone living or working in San Francisco can now get tested for COVID-19. Overall the situation seems not too bad here and our death rate is low. Yesterday the city had the highest number of confirmed cases recorded on a single day thus far, but it's hard to know what that means, given increased testing plus the fact that the tests themselves are not even close to 100% reliable. It is clear, however, that there are significant racial and income disparities in who has tested positive in San Francisco, with Hispanics and Latinos making up a disproportionately large percentage of our cases.

As of today, the United States has 1.2 million COVID-19 cases and close to 73,000 deaths, an insufficient testing capacity, no clear overall strategy for dealing with the pandemic, and wing-nuts refusing to wear masks and bringing guns to anti-shutdown demonstrations. And yet, unfathomably, many states have already begun to re-open. Meanwhile, New Zealand has "effectively eliminated" the virus, and things are looking good in a few other places, like Hong Kong and Australia. If only the U.S. had leadership that was sane and actually cared about it's citizens! I have never been so ashamed of my country. It is scary to live here now.

In California, Governor Newsom wants to start gradually re-opening businesses on Friday (bookstores, music stores, toy stores, florists, sporting goods retailers, etc. for pickup only, plus retail supply chain manufacturing and logistics). A couple of sparsely-populated northern counties have already partially re-opened. Two days ago the SF Bay Area started allowing a few businesses to open including landscaping, construction, and golf. I am sad, disappointed, and a bit angry that the Presidio Golf Course is now closed to us common folk. I miss it already. That big, open green expanse was more valuable to families with children and apartment-dwellers with no yards, than is it to a few golf aficionados. Green space for the people!

Walking the neighborhood in a mask on a cloudy day can be a bit gloomy, so it's good to be reminded that we are "cool" and "grate." Thanks for that little artists! Now I am dreaming big that someday we will get through this alive and relatively sane. 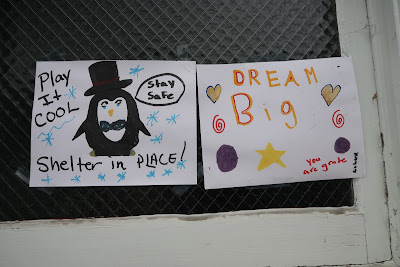 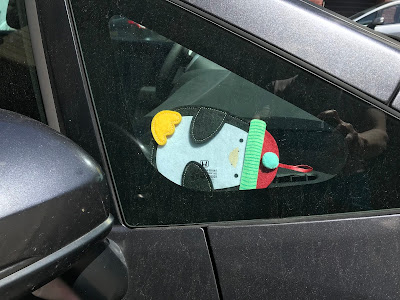 The Window Bears, oh, the Window Bears...They are supposed to be fun for kids I guess, but I have very mixed feelings about them. Sometimes the bears make me smile, but other times they seem trapped - so trapped! - and I have an overwhelming desire to smash all those windows and set them free. This guy looks dismayed and melancholy. I want to give him a hug. 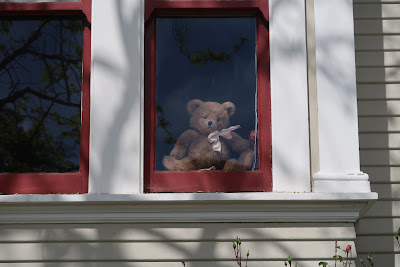 High in their turret the Rapunzel Bears are more jolly. Maybe it's the bright colors, or that they seem to be in the process of building a cheerleading pyramid. Go team San Francisco! 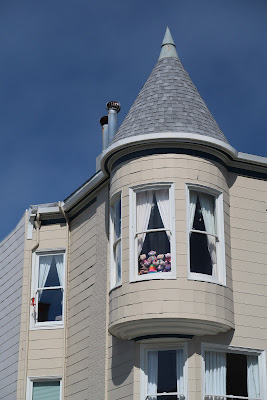 The Wisteria Bears have some kind of Narnia portal thing going on. They are simultaneously safe indoors AND hanging out in the sky. Nice. Can I borrow your magic wardrobe? PLEASE. 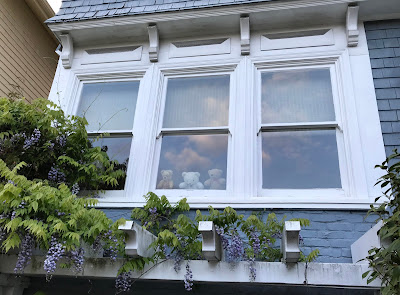 In this house, bears, pigs, and seals(?) of all persuasions sing karaoke love songs together. Wonderfully inter-species! I dig it. Very West-Coast. 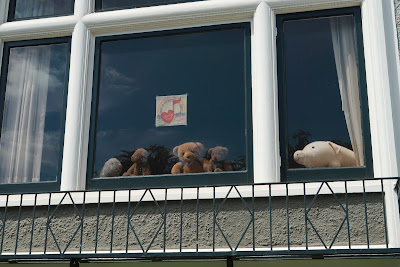 One day on my way home from an excursion I encountered Sad Defeated Bear slumped on the sidewalk around the corner from my apartment. He was in a spot where I have seen homeless people slumped/camped in the past. I wanted to hug him too (so much!), but these days we can't touch anything outside that other people might have handled. Argh! 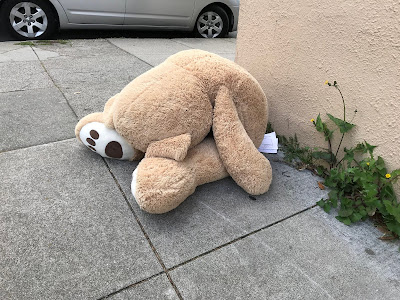 On a happier note, about a month later I saw this window bear, and I've decided he must be (no longer) Sad Defeated Bear - rescued, adopted, and now properly housed, just like our homeless people should be! I need some stories with happy endings right now, so I am writing my own. If our government refuses to lead us to good outcomes we are going to have to make them ourselves. 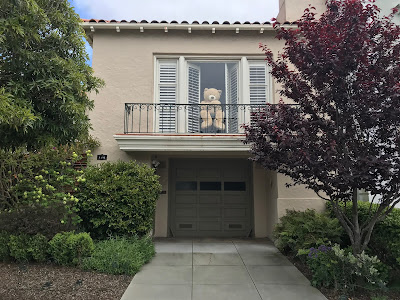 Speaking of happy endings, I've been savoring being able to watch the sun set through my studio window. In the before-times (I can't believe I am saying this, and not as a joke. Now we are all living in a dystopian/apolcalypse-in-progress world. It's still hard to accept that we are not leaving the movie theater any time soon, possibly for years to come.), yes, in the before-times I was rarely home for sunset viewings. I was out and about teaching piano in people's homes, sounding checking for a gig, or on some far-flung wilderness adventure. Now I have sunset windows instead, a consolation prize I guess.

My window-with-a-view faces northwest, and for most of the year no direct sunlight beams through it. Very recently the sun began setting far enough north that my studio and I receive a few minutes of direct light just before the sun journeys below the horizon. A confirmation of my continued survival, evoking fantasies of fast-forwarding to the end (of the pandemic), dusk has become a bright spot in my day. 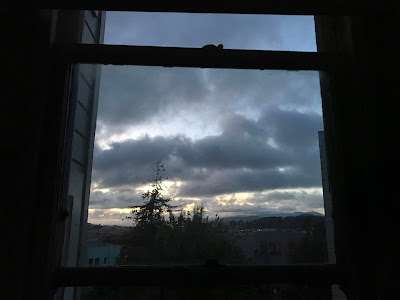 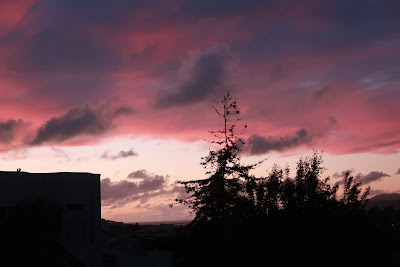 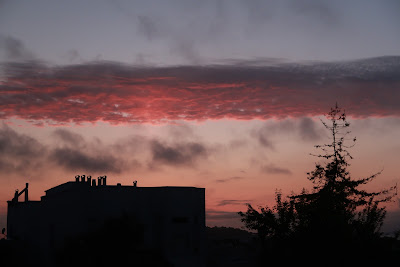 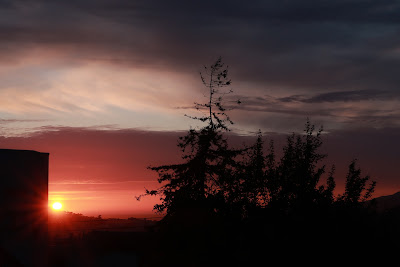